Those of my readers who aren’t entrenched in the American Jewish community may not know that Teaneck, NJ is a the Modern Orthodox mecca. Only the true cognoscenti know the real reason behind Teaneck’s success . . . MARBLE CAKE.

Marble cake is THE cake to buy at Teaneck’s kosher Butterflake bakery. Every Friday,  hundreds (thousands?) of these cakes fly off the shelves and once you taste one, you’ll know why: it’s a great cake that’s light, chocolaty enough without being overwhelming, and it appeals to kids but isn’t too sickenly sweet—in fact, its chiffony lightness makes it work for grownups, too.   So that’s the secret: a cake that everyone loves.

Thanks to our Teaneck relatives, we discovered Butterflake’s marble cake years  ago. Our fearless photographer, REG, fell in love with this cake when she was a toddler and we’ve been importing them from Teaneck ever since.  Sometimes after a visit to the cousins, we buy several cakes and freeze them for the future.

There are times, however, when we have neither this ur-marble cake in the freezer  nor plans to go to Teaneck. When that happens, I turn to my mother’s marble chiffon cake recipe.  It’s not quite what Butterflake makes (and it may be impossible to get the consistency of Butterflake’s glaze without some additive I don’t want to know about) but it’s pretty darn close. There’s actually a disagreement in our family: My husband says this is better than the Butterflake cake but my fearless photographer votes for the bakery version.

A great cake for company
Photography by REG

Actually, I only recently realized that both marble cakes and chiffon cakes are so passé that (like my pink-tile bathroom) they are about to come back into style.  I’ve always loved the way that marble cake allows me to bypass the either/or choice of chocolate or vanilla.  I also love whipping meringues into light fluffiness though I do wonder which Neanderthal woman first discovered that not only could you eat an egg, but if you separated it and beat it, it would be all light and fluffy and add height and lightness to your baking. 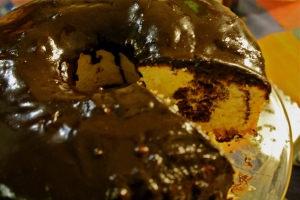 Thanks to my mother’s extensive tutorials when I was her tween sous-chef, I often bake with beaten egg whites. There’s nothing to be scared of as long as you follow these rules:

So without further ado:  my mother’s marble chiffon cake recipe in all its mid-twentieth century glory.

2 ounces unsalted butter or margarine (yes, margarine because it’s a recipe from the 1960s and that keeps this nondairy for the kosher crowd)

For the chocolate part of the marble cake:  Mix cocoa, ¼ cup of the sugar and the hot water and set aside to cool.

For the cake: Separate eggs and beat the whites gradually adding cream of tartar until stiff and dry.

Put sifted flour, sugar, baking powder and salt in a bowl. Add oil, egg yolks, water, vanilla and lemon extracts and mix until smooth.  Gently fold in around one cup of egg whites into this mixture and then fold the mixture gently back into the egg whites.

Remove one cup of batter and add it to the cocoa mixture. Pour white batter into pan and then swirl cocoa batter into this.

Remove and cool on rack. When fairly cool, invert and then remove from pan when totally cool.  When you remove it from the pan, place it on strips of wax paper so that you can dribble  the glaze and then remove the mess and feast on the chocolate droppings, leaving the serving plate clean.

For the glaze: Melt chocolate, vanilla, and butter/margarine in the top of a double boiler. As this mixture is melting, add the water. When it’s all blended remove from the double boiler and  quickly whisk in the gently beaten egg–and do your best not to scramble the egg.  Add confectioners sugar. When all is encorporated and the mixture is nice and glossy,  pour it over cake. You don’t have to cover the sides but there should be lots of drippings on the side. Ideally, you won’t serve this immediately and the glaze will harden a little.