One of the hardest parts for me during pregnancy was living in the US after having lived in Israel for 14 years. The problem was that I craved Middle Eastern food, particularly kubbeh soup and I couldn’t find any kubbeh soup when I needed it.

The many varieties of kubbeh soup all have a sweet and sour broth with dumplings often made of semolina (but it could be rice or bulgur) stuffed with meat (or maybe mushrooms for the vegetarians). That description should make it clear that kubbeh soup is an elixir for a pregnant woman.  It may not be exactly scientific, but when you’re trying to grow another living being inside you, what could be better than starch, animal protein, and a nice hydrating broth?

Back in the waning days of 1998, my craving for kubbeh soup was fierce and Mr. Dot and I spent one evening driving around LA calling the various kosher Middle Eastern restaurants on our ginormous flip phones to see if they had kubbeh soup. A now defunct hole in the wall promised to make it the next week which wasn’t quite soon enough. Somehow, I made it through that horrible night without hopping on the next flight from LAX to Tel Aviv.

I have never made my own kubbeh soup because it’s one of those labor intensive things that I thought you could only make it you learned the recipe and technique from your Moroccan or Kurdish grandma.

Years later I came upon the recipe for nanaeyah, in Claudia Roden’s encyclopedic Book of Jewish Food  and realized I could easily get some of the tang that I love in kubbeh soup—without the kubbeh and without the soup. According to Roden, nanaeyah was considered an every day dish by her grandmother in Baghdad but I have successfully made it as a first course for an elegant meal or as hors d’oeuvres for a party. Like all dishes that I make a lot, this one has been adjusted here and there and I’m not sure if a Baghdadi grandma would recognize it (and she would definitely be contemptuous of my not even trying to make kubbeh). Even as I tinker with the recipe, it retains some of that essential sweet/sour/minty/garlicky/meaty flavor that my pregnant self sought that desperate night in LA.

On a recent lazy summer night, I made a weeknight dinner version of the minty meatballs with odds and ends from my almost bare pantry. And that’s another plus of this recipe in addition to its being an easy way to get those tangy flavors: most of the ingredients are pretty easy to have on hand, especially if you grow mint in your yard (and trust me, as someone with the opposite of a green thumb, it’s very easy to grow mint in your yard).  I find that they liquidy, tangy quality make this work well with  ground turkey instead of beef or lamb for a lower cholesterol edge.

And so, without further ado, my healthful (thanks to the turkey), scraping-the-bottom-of-the-cupboard (that’s why there’s a red onion) version of Nanaeya. 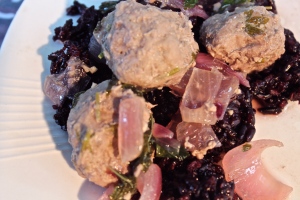 salt and pepper to taste

Mix the turkey with salt, pepper and parsley and roll into balls the size of small walnuts. Set aside.

Fry the onions in the oil until soft.  Add garlic and the meatballs and cook turning meatballs to brown on all sides.  Pour in water to not quite cover the meat and bring to a boil. Add pinches of salt and pepper and simmer for 25 minutes so that the sauce is reduced. You can turn the meatballs again if you think they need it.  Mix the lemon juice and sugar and pour over the meatballs and then add the mint.  Cook for 15 minutes more.  Serve with rice.

I used leftover black rice (which is purple) and a red onion because that’s all I had and while this wasn’t authentic (and I thought that cooking with it would turn it muddy brown, but it didn’t), it was delicious and beautiful.  In fact, the red onion gave it a redness that beef might have had and added a little something extra that the turkey would not have had on its own.