We like to console ourselves with our failings by saying better late than never, but sometimes it’s just not the case and so most of my readers probably aren’t in the mood for a Passover dessert. My only excuse is that it took us a while to get the pictures together.

And to sweeten this post, I’ve added a joke if you keep reading; this dessert will work if you need a gluten-free showstopper; and there are a few good memories of some heretofore unmentioned family members: my dad’s aunts and uncle in Tel Aviv.

Every family has an aunt whose house is THE house you visit. In my dad’s family it was a little complicated because in the 1920s and 30s, 3 of of my grandmother’s siblings left Warsaw for Tel Aviv and 3 for New York. Aunt Lifsha married a cousin (it’s a long story, but a lot of my dad’s relatives married relatives because those were the only people whom they felt were worthy marital partners). Lifsha’s husband invested in Tel Aviv real estate and they had an enormous apartment in a building they built in grand Bauhaus style in the late 1940s. My sister always joked that our visits to this  large centrally located apartment (near Dizengoff Square) with its custom-made furniture gave us a totally skewed impression of how most Israelis lived.

A weekend at Aunt Lifsha’s included her standard meals that were pretty traditional, heavy kosher Lithuanian fare which I came to call the “8 carb Friday night special.” First up would be chicken soup with homemade noodles, AND matza balls (all year round, not just for Passover) AND a special knish-like object for the soup. If you’re keeping score, I’m not even counting the ritual challah bread, and we’re already at 3 carbs by the soup course. 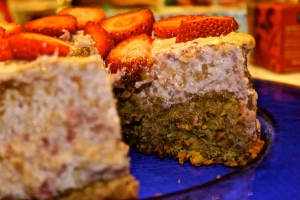 Another specialty of the house was Aunt Lifsha’s cholent, which she served, of course, at Saturday lunch. One of my favorite things about visiting was the relationship that Aunt  Lifsha had with her brother Uncle Mikhail.  They shared so much love and affection and related to each other like affectionate teen siblings even in their 80s. In many ways, their lives were different: Lifsha’s family was religious. In fact, the only newspaper in her house was the organ of the National Religious Party, Hatzofe, while Uncle Mikhail was proudly secular Zionist and Socialist. Uncle Mikhail was a gentle and witty man and every time there was cholent he would tell the same joke, which remains one of my favorites:

“Did you hear the story about the Jew who said only 2 things remain of my Judaism? My love of cholent and my fear of dogs.”

Of course, no 8 carb meal was complete without a sponge cake and “rafrefet” which was a sort of sherbet made from strawberries, egg whites and sugar. Incidentally, Uncle Mikhail’s wife, Aunt Guta made her own version of all of these baked goods and if I visited Tel Aviv, I’d make the rounds after an 8 carb meal, and have tea and cake and eat Aunt Guta’s version as well. For the sake of full disclosure, all of the aunts baked the same things but Aunt Guta always had new recipes and her versions were always a little better. 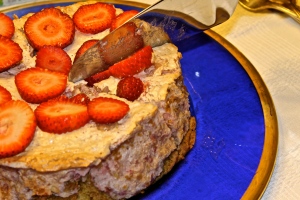 Anyway, back to rafrefet: Ideally, this would be made when strawberries were in high season and the outdoor market sold “b” quality strawberries that were cheaper. By tthe time you got home from the market, these b quality berries  really were already soft and too juicy to eat plain,  but they were great for rafrefet. I have a weakness for things like rafrefet and I don’t mind eating raw eggs.

As to  show-stopping cake, it’s kind of rafrefet plus. For years, I’ve been making a version of this Nigel Slater cake from the NY Times for Passover (without the rosewater and with matza cake meal instead of flour). I’m not sure what my great aunts would think of the extra fanciness of this. Maybe Aunt Guta would have gone to the trouble. Maybe. Or maybe all you really need is rafrefet  and a good sponge cake.

But to be honest, I still love cholent and am kind of scared of dogs.

Preheat oven to 325°F. Lightly brush a 9-inch springform pan with oil and line bottom with a round of parchment paper. Brush parchment with oil and set pan aside.

In a food processor, pulse pistachios with 1/4 cup sugar until finely ground (avoid overgrinding); set aside.

In two large bowls, separate eggs into yolks and whites, (you don’t need the sixth egg white for the cake—you can keep it for the meringue). Add 1/4 cup sugar, vanilla, and salt, to bowl with egg yolks and beat using an electric mixer until thick and pale yellow, about 2 minutes. Set egg yolk mixture aside and thoroughly clean and dry the beaters.

Add a pinch of salt to the bowl with the egg whites and beat using an electric mixer until soft peaks form. Gradually beat in remaining 1/4 cup sugar, and continue beating until stiff peaks form.

While the cake is baking, make the meringue topping.

First, squeeze out as much liquid as possible from the strawberries. Squeeze them through a cheesecloth or coffee filter. They don’t have to be totally dried out, but you want to remove a lot of the juice. Then, process the strawberries in the food processor and strain them again. Whisk in almond flour and potato starch.

In a large bowl using an electric mixer, beat the egg whites and vinegar until soft peaks form, then gradually beat in the sugar and continue to whip until meringue is stiff and glossy and all the sugar has dissolved, 7–8 minutes. Gently fold almond mixture into meringue until just combined.

Remove cake from oven. Using an offset spatula or table knife, spread meringue mixture evenly over hot cake, starting from the outside and working your way into the center. Return cake to oven and bake until meringue is lightly browned and crisp, 25–30 minutes. Transfer pan to a wire rack to cool, and immediately run a knife around the edge of the cake to loosen it from the pan. Release and remove the side of the springform pan. Let cake cool at least 30 minutes before decorating.

The cake can be made up to one day in advance.